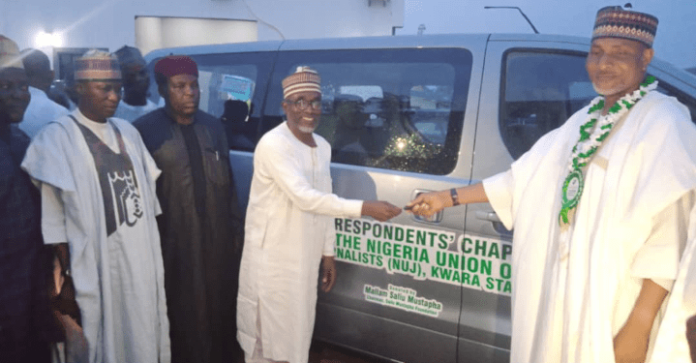 A frontline aspirant for the All Progressives Congress (APC) National Chairman, Malam Saliu Mustapha, on Saturday, donated a Hyundai bus to the Correspondents’ Chapel of the Nigeria Union of Journalists (NUJ) in Kwara State.

Mustapha formally presented the 12 – seater bus to the Chapel Chairman, Hakeem Garba, shortly after his investiture as the Patron of the chapel.

The brief ceremony held at NUJ Secretariat Ilorin, Kwara State, had in attendance, State Chairman of NUJ, Umar Abdulwahab, Veteran journalists, members of the Correspondents’ Chapel among others.
Veteran journalist, Tunde Akanni decorated Mustapha with the insignia as the patron of the chapel.

In his remarks, the founder of Saliu Mustapha Foundation and former governorship aspirant applauded the chapel for the honour.

Mustapha, who was the Deputy National Chairman of the defunct Congress for Progressive Change (CPC), noted that union remains an integral part of the society which he would always identify with.

He said “I accept the offer to be the chapel’s patron because journalists not only inform and educate the people but also mould people’s opinions.

“I will therefore like to associate with such a segment of society.”

Garba thanked Mustapha for accepting to serve as the patron of the chapel as well as the donation of the bus.

In a letter titled “Be Our Patron,” dated April 22, and addressed to Mustapha, the body had explained that its members had approved his choice after a “thorough and dispassionate considerations of various choices” both within and outside of Kwara State.

“The chapel has noticed with pleasure, your humanitarian activities across Kwara State in the last few years. We have particularly noted your robust relationship with the media in and outside of the state,” the letter signed by Garba, indicated.

The body described the former gubernatorial aspirant as a spirited leader and mentor whose “rich pedigree is capable of taking our organisation to greater heights.”

“It is in view of the above, and more that we invite you to be our patron. We hope you will give this humble request a favourable consideration,” the chapel said.