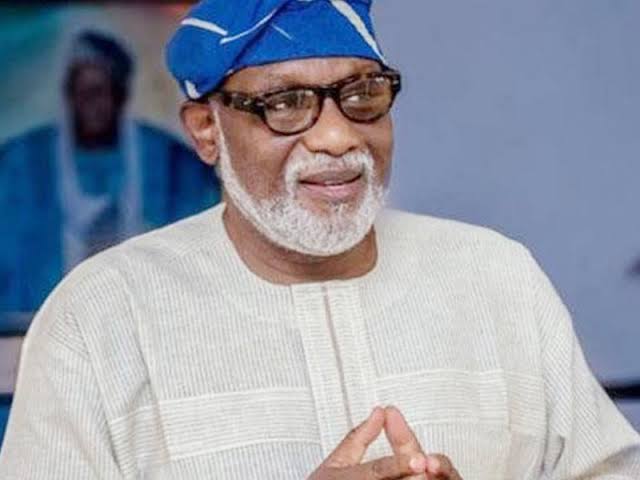 Ondo State Governor Oluwarotimi Akeredolu has said the killing of ace broadcaster, Bunmi Afuye, during a bank robbery was painful, pathetic and unbearable.

The News Agency of Nigeria reports that Afuye was hit by a stray bullet during the robbery at a branch of United Bank of Africa at Ilara-Mokin, Ifedore Local Government Area of Ondo State on Thursday.

Until his death, he was the Public Relations Officer of a private university, Elizade University in Ilara-Mokin in Ifedore Local Government Area of Ondo State.

Afuye, an Ekiti indigene, was killed alongside a policeman and motorcyclist during the robbery.

In a statement by the Chief Press Secretary to the Governor, Richard Ilesanmi on Friday in Akure, the governor said his death had cost the journalism profession a bright and upcoming star.

Akeredolu said the late Afuye was particularly close to the state government, especially his candour and carriage and brilliant delivery at functions he had reasons to grace.

“His demise is not just painful. It is very pathetic and unbearable,” the governor said.

The governor expressed his condolence to the wife, children, family, the university community and the Nigeria Union of Journalists.

Akeredolu said he had directed security agencies to ensure the perpetrators of the crime were apprehended and brought to book.

Also, the All Progressives Congress has described Afuye’s killing as shocking, adding that it smacks of callousness.

In a statement on Friday by its Publicity Secretary in the state, Mr Alex Kalejaye, the party said, “Ondo State Chapter of the All Progressives Congress laments the demented and heartbreaking operation.”

Kalejaye described Afuye as a clear and penetrating voice that was always captivating and attention-catching.

According to him, the deceased is unarguably one of the best around, amiable and courageous, even till his untimely end.

The publicity secretary urged security agents in the state to leave no stone unturned in bringing those behind the dastardly act to book.

“Without contention, the APC-led government places an unequalled premium on the security of lives and property.

“This singular event will further ginger the government to spread its security tentacles even deeper.

“The party urges security agencies to swing into action and track down the mindless killers of Afuye and others, so they could face the wrath of the law,” Kalejaye said.

The party commiserated with the Nigerian Union of Journalists, particularly the state branch, and the immediate families of the deceased; and prayed God to grant the departed eternal rest.

Seven days of mourning has been declared by the Nigeria Union of Journalists, Ondo State Council, to honour their departed colleague, Afuye.

This was contained in a statement signed by the NUJ State Chairman, Mr Adetona Aderoboye, and Mr Leke Adegbite-Adedoyin, the State Secretary in Akure.

“His untimely killing by dare-devil armed robbers at Ilara-Mokin is the highest level of callousness, wickedness and unforgivable act of cutting short the life of one of our Brightest, Cerebral and Versatile colleagues.

How the absence of evaluation is killing PR in Nigeria