Weber Shandwick has reclaimed top spot in the 2021 edition of the Global Creative Index, marking the fourth time in five years that the IPG Dxtra firm has ranked first in PRovoke Media’s annual benchmark of creativity in the public relations world.

The 10th edition of the Global Creative Index analyses entries and winners from more than 25 PR, digital and marketing awards programmes from around the world over a 12-month period, up to and including the 2021 Global SABRE Awards. The formula takes into account the expansion of ‘public relations’ work across multiple categories at advertising-oriented shows such as the Cannes Lions, many of which resumed this year after pausing in 2020.

Weber Shandwick‘s performance was led by ‘The Climate Store’ campaign for Swedish food brand Felix, which also took top spot on the 2021 Campaigns table. Weber Shandwick also benefited from a range of work across the firm’s global network, including Cannes Grand Prix for AB InBev and Spinneys, along with winning campaigns at several other major shows for Airbnb, Iceland, Nike, Novartis and Unilever.

Weber Shandwick moves up from fourth in 2020, ahead of BCW, with last year’s top-ranked firm dropping to second place, and Edelman, which also drops one spot to third. BCW’s performance featured a particularly strong Asia-Pacific component, including the Global SABRE Best in Show for Lenovo China, and other highly lauded campaigns for Brittania, Gillette and Uber. Edelman, meanwhile, was led by campaigns for HP, Starbucks, Sunkist Growers and Unilever.

The top three are separated by less than 20 points, some distance ahead of Ketchum, which drops to fourth spot from third in 2020. Golin jumps from seventh to fifth, ahead of FleishmanHillard and MSL, both of which also move upwards this year.

Once again, the top of the overall agency table is dominated by global PR networks, thanks to their volume of awards

However, an alternative measure of agency creativity comes from weighting agency scores according to their staff size. Accordingly, PRovoke Media has again used a points per head calculation to identify which are, ‘pound for pound’, the most creative PR agencies in the world. 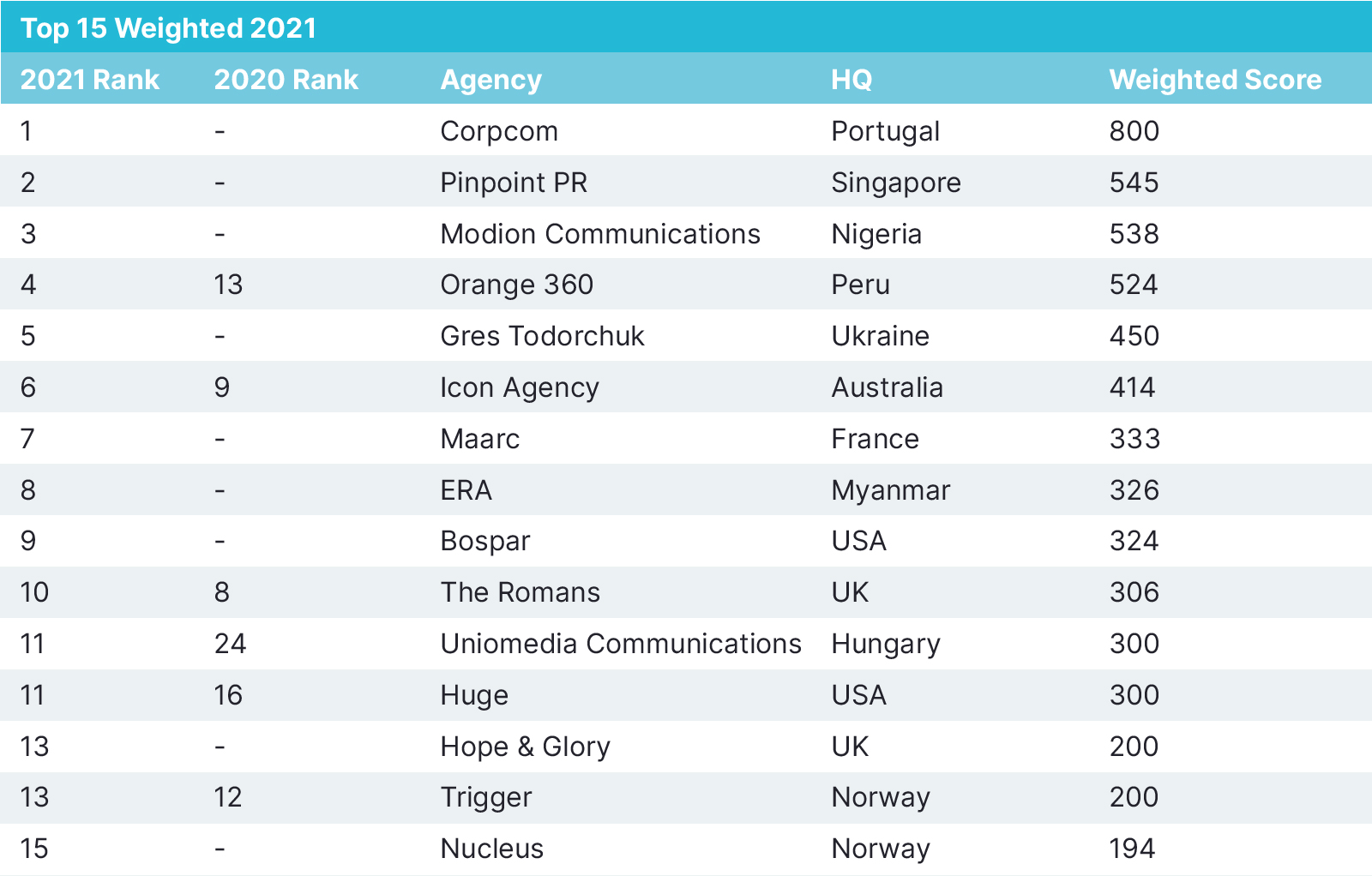 In 2021, this title is taken by Portuguese firm Corpcom, thanks to campaigns for Hertz. Singapore’s Pinpoint PR ranks second, moving up from third in 2019, with Nigeria’s Modion Communications coming in third.

In fourth place, Peru’s Orange 360 moves up from 13th in 2020, ahead of Gres Todorchuk from Ukraine and Australia’s Icon Agency.

The geographic diversity of the weighted table again stands out. In addition to Portugal, Singapore, Nigeria, Peru, Ukraine and Australia in the top six, there are also firms from France (MAARC), Hungary (Uniomedia), Myanmar (ERA), Norway (Trigger and Nucleus), the UK (The Romans and Hope&Glory) and the USA (Bospar and Huge).

To better rank agencies against their peers, the weighted table is also segmented along regional lines, producing top five rankings for North America, EMEA and Asia-Pacific, as follows:

‘The Climate Store’, the pop-up store that priced products according to their carbon dioxide equivalent, emerged as the most-awarded PR program of the past 12 months according to PRovoke Media’s 2021 Global Creative Index. The campaign from Swedish food brand Felix also ranked 21st among Global SABRE winners.

The Index analysed entries and winners from more than 25 PR award programmes from around the world, over a 12-month period, using the 2021 Global SABRE Awards as a cut-off point. Scores were weighted according to a PRovoke Media formula that placed particular emphasis on Best in Show winners, while also taking into account the expansion of ‘public relations’ work across multiple categories at advertising-oriented shows such as the Cannes Lions. 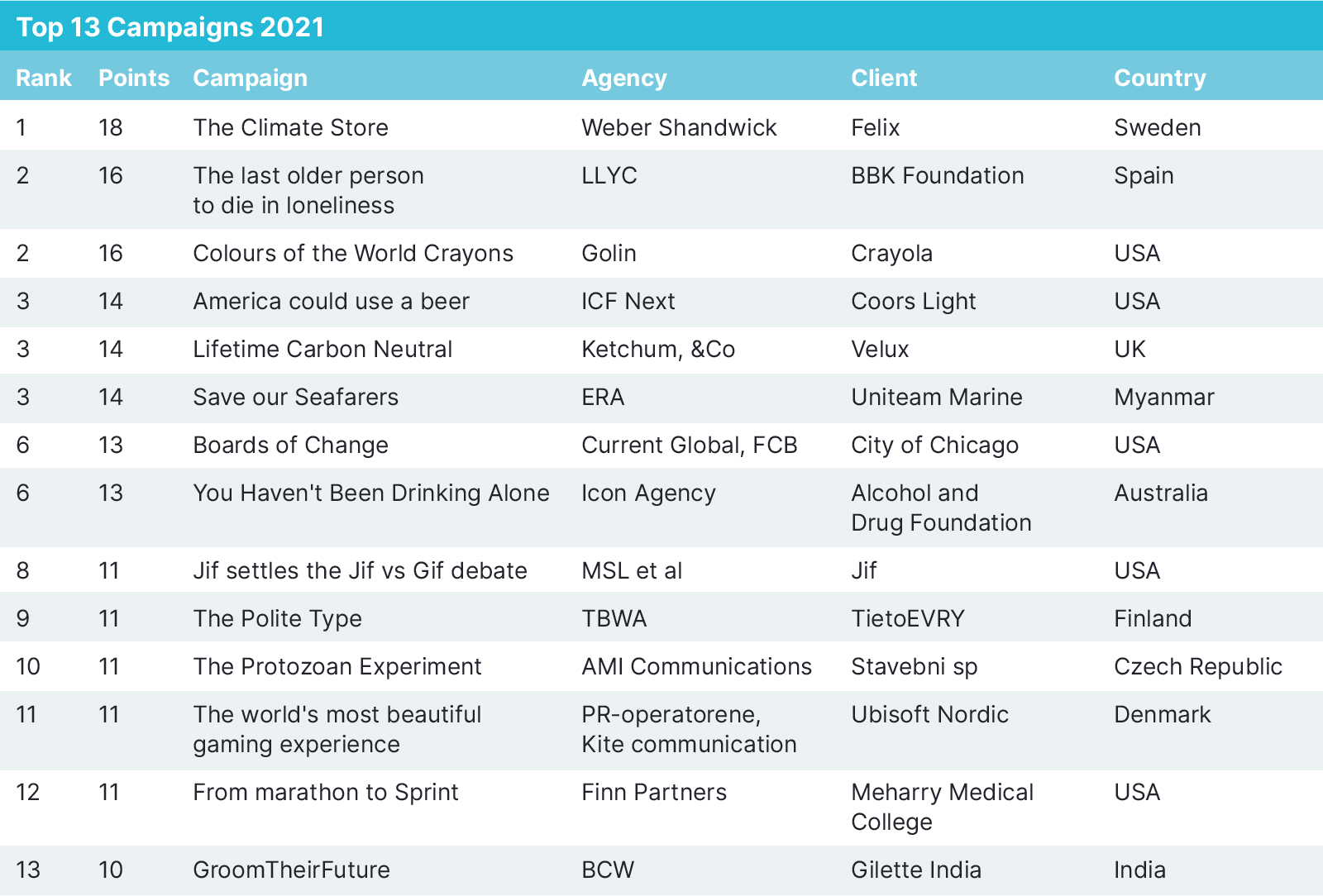 The results, which rank the top 13 PR campaigns as determined by award shows, reflect how brand communication adapted to the unique challenges of the pandemic, focusing on economic and social disruption and addressing such topics as race, gender, environmental sustainability, loss of earnings, loneliness and child protection.

AB InBev ended P&G’s four-year run atop the Global Creative Index’s ranking of companies, according to the performance of their campaigns in the various award shows that are tracked around the world. The brewing giant narrowly edged out Unilever in second place, and P&G in third, with just two points separating the top three. 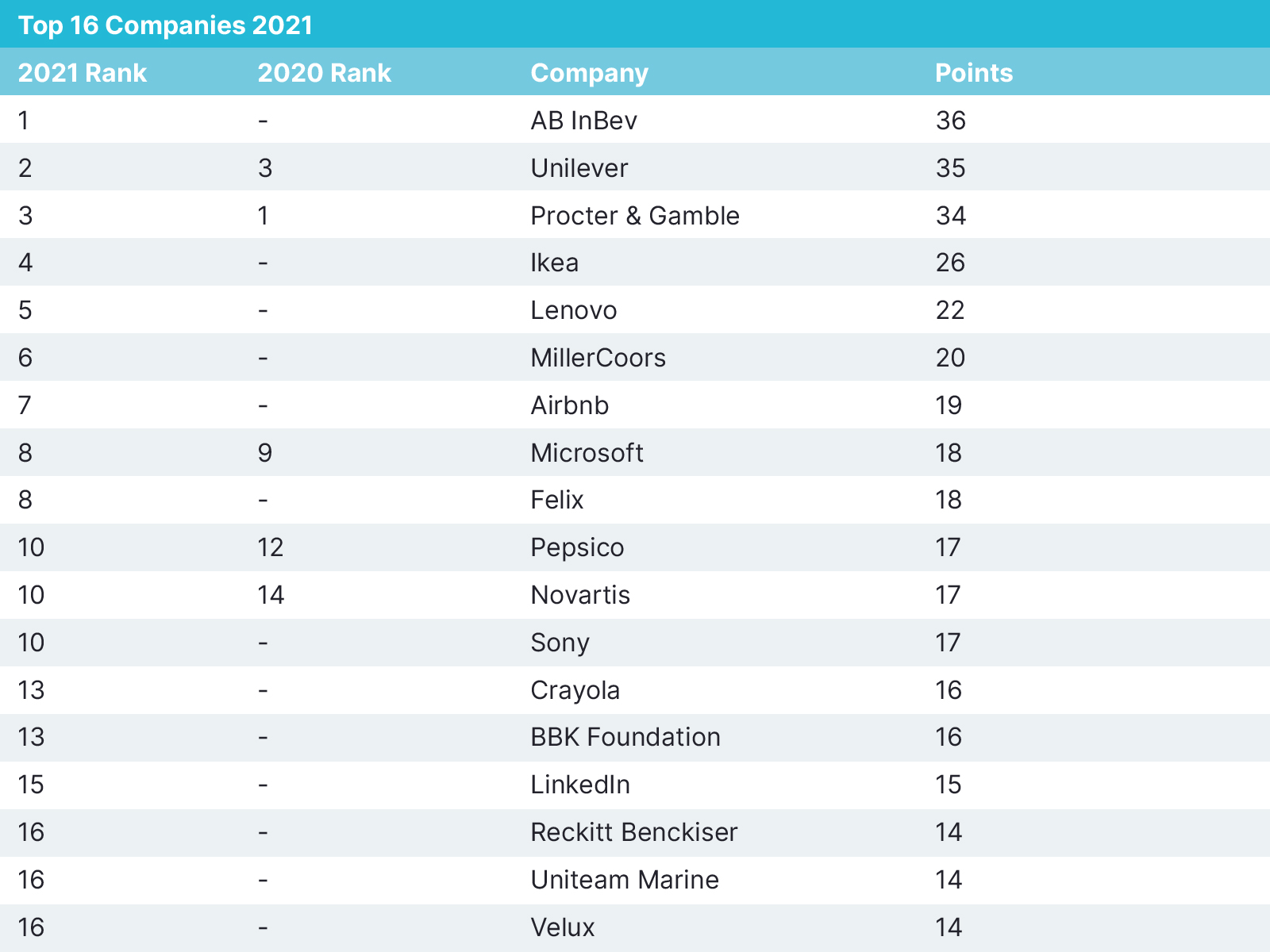 AB InBev’s haul was led by award-winning efforts for such brands as Budweiser and Goose Island, along with the corporate ‘Contract for Change’ and ‘We are in this Together’ initiatives.

The Global Creative Index also ranks holding groups based on their agencies’ creative performance. WPP retains top spot for the fourth consecutive year, thanks to the efforts of BCW, Ogilvy and H+K Strategies. Interpublic ranks second, leapfrogging Omnicom PR Group which drops to third. DJE and Publicis round out the top five.

Role of Project Managers in Mitigating Collapse of Structures in Nigeria

How to Amplify PR Opportunities for Business